US pair primed for disabled dog-fight

CAPE TOWN, 14 May 2017: Team America say they intend to "kick butt" in the 54-hole Canon SA Disabled Golf Open, which tees off alongside the 12-nation World Cup of Disabled Golf in Cape Town on Monday.

Members watching Chad Pfeifer and Kenny Bontz during the official practice round at King David Mowbray Golf Club were hard pressed to believe the dynamic duo are truly disabled. Both may have lost their left legs – Pfeifer's was blown off in Iraq and Bontz lost his to cancer – but these above-the-knee amputees both play off scratch and hit the ball a land mile.

In fact, in Sunday’s practice round, defending champion Pfeifer blitzed the par-72 layout with a bogey-free five-under-par 67. Just last week, Bontz brought a par-70 course in Florida to its knees with a blistering eight-under 62 in a celebrity golf event.

Pfeifer and Bontz have played a lot golf against each other, but this week marks the first time they will combine for their country. Pfeifer is relishing the challenge.

“It’s going to be a dog-fight at this track,” said the former US Army corporal, who lost his leg when the vehicle he was driving in war-torn Iraq set off a landmine in 2009.

“It’s a fun layout and it’s got nothing really quirky about it. It’s very fair and it’s going to come down to whoever putts well. It’s a shot-makers’ course and it doesn’t give advantage to the long hitters at all the holes.”

Pfeifer had never played golf until his leg was amputated, but he caught the bug when a fellow soldier suggested it as a form of rehab. In the last few years, has teed it up on the PGA Tour’s development circuit – the Web.com Tour – and the Idaho native also competes on smaller Tours against regular professionals.

He is well known in the US golf industry his inspiring motivational talks and his uncanny ability to make plenty of birdies.

Last year Pfeifer claimed his third National Amputee Association’s National Championship title and won the World Disabled Golf Championship title in Canada, but he was out for about four and a half months with a bulging disc that caused problems with his prosthetic and he only returned to competitive golf in January.

“I played in a celebrity event and I finished 15th and I haven’t played much tournament golf since,” he said. “I have been practicing hard over the last couple of week and the putting was great out there today. I really want to defend my Canon SA Disabled Golf Open title this week and besides, I can’t let Kenny do all the work in the World Cup or I’ll never hear the end of it.”

At 41, Bontz yearned to be the best disabled golfer in the United States, a goal he accomplished when he captured the National Amputee Association’s National Championship title in 2011. Two years later, he claimed his first international success in the Queensland Open and finished third in the Australian Open.

The New Jersey golfer captained the US team in the first World Cup of Disabled Golf in South Africa and also skippered the side at the World Disabled Golf Championships in Japan.

“Both events were held in 2014 and it was a fantastic experience for myself and team mates to go up against top disabled golfers from all over the world, so this week is going to be absolutely fantastic,” said the 47-year-old, who has ambitions to be the first amputee to qualify for the Champions Tour when he turns 50.

“I got to say I love this golf course, although I battled a bit on the greens; they are a little slower than the ones I played in Florida last week. The course is great shape. There are some great scoring holes and then there are ones where par is the target. And the par threes are legit.

“Whoever wins the SA Open title will have to be a great golfer, because there is huge depth in this year’s field; you’ve probably got the best in the business playing in South Africa this week. As far as our chances in the World Cup go, Chad and I really fire each other up, so we’ll be tough to beat.” 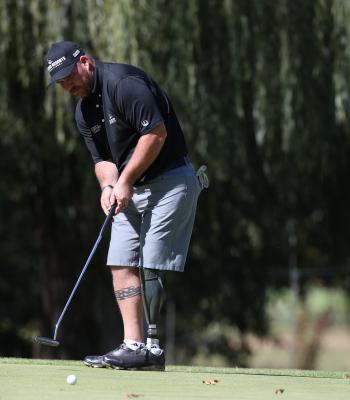 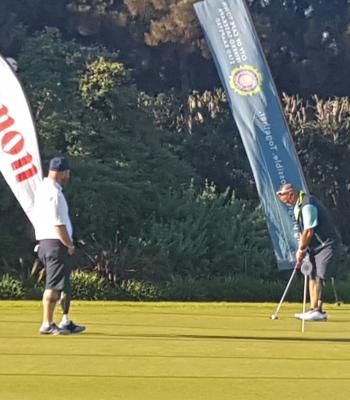