TROPHY OF HOPE DONATED TO THE SADGA

King David Mowbray and the SADGA have enjoyed an immensely symbiotic relationship since the home of South African disabled golf moved to the historic club in January 2015 following the merger between King David and Mowbray GC. KDM has been fantastic in its support of the Association ── providing both office space as well as allowing the SADGA members participating in the First Swing Programme or training camps full-use of club facilities.

Now though, the SADGA wishes to thank the members for their generosity. A member of the club, who would prefer to remain anonymous, has very kindly donated a magnificent silver cup to the association. The “Trophy of Hope” was initially used as a floating trophy awarded at fundraisers held at Clovelly CC in aid of Cerebral Palsy sufferers.

While SADGA is yet to decide on whether the name shall be retained, the decision has been made to award the trophy to the low-South African at all future Canon SA Disabled Golf Opens. The Association feels this trophy is a fitting way of acknowledging the achievements of South Africa’s best disabled golfers and is thankful to the donor for their thoughtful donation. 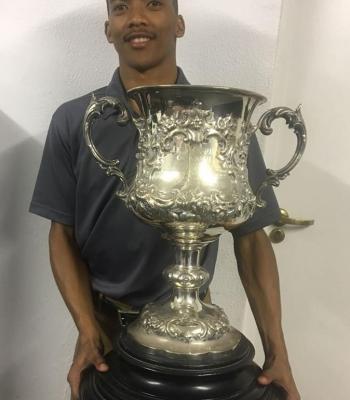