TSHWANE, 4 May 2015 – Charl Theron was smarting after an opening 81, but a couple of putting tips from defending champion Josh Williams has given the 17-year-old Stellenbosch golfer new perspective and drive for the second round of the Nedbank SA Disabled Golf Open.
“Charl doesn’t hit it that far, but he is an excellent ball striker and his accuracy and placement is really impressive,” said Williams after the four-ball completed the first round on Monday.
“He lost a lot of strokes on the greens, especially inside 10 feet, so I just spent a little time with him and showed him a few things I believe will improve his game.”
Theron might have been disappointed to finish nine strokes behind Williams, who got his title defence off to a solid start, but he finished seventh overall in 0-18 handicap division.
“I spent a lot of time on the putting green, practicing the moves Josh showed me, so hopefully I can reel the guys in on Tuesday,” the Western Province golfer said.
Theron is lying second in the Les Autres Division behind former champion Iglin Grobberlaar, while fellow First Swing Programme golfer Ignation Doeries opened with an 85 to tie for 11th in the overall competition and third in the Les Autres Division.
Daren Hanekom leads the Deaf U-23 IPS Division on 36 points, with Shane le Roux second on 19 points and Jaco Lumley third on 11 points.
Hanekom is third in the Deaf IPS (Handicaps 10-36), three points behind pacesetter Raymond Graaff.
Godfrey Baloyi scored 25 points to tie for sixth, while Le Roux finished in eighth place and Lumey ninth. 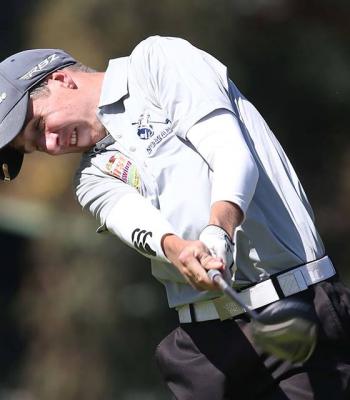