Craig Stirton played in a golf fundraiser benefiting Sunshine Ladies Tour and Symetra Tour pro Cara Gorlei at Milnerton Golf Club on Friday the 19th of March. Here are his thoughts on a brutal but enjoyable day. The views expressed in this write-up are Craig’s own and do not necessarily represent those of the South African Disabled Golf Association.

Initially I was caught in two minds about whether or not to play. Off a modest 22.5 Handicap Index and with a golf podcast that has profiled some of the best players in South Africa (including Gorlei), I was wary of putting my game on public display. On the other hand, the Free Drop podcast is about supporting the next generation of South African players  wherever and whenever possible. Eventually, someone remarked that it would be lame of me not to play. My mind was made up.

After an opening tee-shot which was average at best - I played some solid golf. Three bogeys and a par in my first five holes was as good a start as I could have hoped for. But it wouldn’t be a scorecard with my name on it without bursts of unnecessarily high numbers.

Anyone who has played Milnerton multiple times knows that it’s imperative to make hay on the opening nine when the prevailing wind is at your back. With 19 Betterball stableford points at the turn, my dad and I knew we were behind the 8-ball.

The wind we battled on the inward nine is best described as apocalyptic. An unrelenting three and sometimes four-club gale proved a tough challenge for my ball-flight which is anything but penetrating. I made the conscious decision on the 12th tee to not become upset by my play because the day was about supporting Cara rather than the number of points we eventually signed for.

In the end, our haul of 34 points was never truly going to challenge for prizes. There were plenty of highlights from the day, though. The delicious wraps being served on the 7th tee were surpassed only by the custom-made Free Drop masks we received at registration - a cool momento from a memorable day.

In two weeks, Cara will begin her second season as a pro golfer with her eyes set firmly on LPGA Q-school in August. Making it as a pro golfer from South Africa is incredibly tough though so if you’d like to play your part in helping the next generation of South African golfers, visit @caragorlei on Facebook and Instagram to find out how you can help. 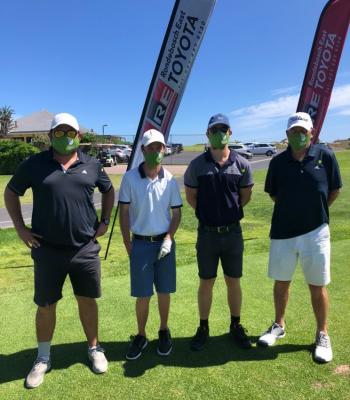