At the end of June 2015 the International Blind Golf Association (IBGA) staged its second international team matchplay event along the lines of the famous Ryder Cup. Competition was between the North American Team (with players from USA & Canada) and the World Team (with players from elsewhere in the world). The event was staged at the magnificent Villa d’Este Golf Club, near Lake Como in northern Italy.

Teams consisted of 12 players each, and were selected from the top ranked players in each of the three sight categories (B1, B2 and B3). The world team comprised 5 players from England, 3 from Italy, 2 from Scotland and 1 each from Israel and South Africa (Garrett Slattery, a member at the Stellenbosch Golf Club).

This beautiful course winds its way through chestnut, ash and pine trees. Undulating fairways and greens make this course an excellent test of golf. Villa d'Este is considered one of the most challenging and difficult courses in Europe, and has hosted several significant amateur competitions. The clubhouse overlooks several holes and looks across the course to Lake Montorfano.

The hospitality shown to everyone by the club was outstanding. After each day’s play the teams gathered on the balcony overlooking the course and enjoyed some great food over a couple of drinks.

The competition was played over three days. On the first two days players teamed up in pairs and played using the Pinehurst system (whereby both players in the pair tee off and then swap balls to play the second shot, after which the better ball is selected and played out on an alternate shot basis). The third day had all 12 players playing singles.

Day 1 saw Garrett pairing up with John Eakin of England. Despite a solid performance from Garrett and John, the 16 shots they had to give away eventually took its toll, and the pair lost 1 down on the 18th to Jim Baker (US) and George Thirkill (Canada). Despite the home favourites of Andrea Calcaterra (team captain) and Chiara Pozzi also going down, the World Team took a 1 point lead into the second day.

On day 2 Garrett paired up with Andrea, and they put on an excellent display to win 6&5 over Jim Baker and Harry Hester (US). Strong performances from the other players in the World Team meant that they stretched their lead to 3 points after the second day, with the 12 singles matches still to follow.

Day 3 arrived with both teams still believing the trophy was up for grabs. A good start from some of the North American players in the early matches saw them start to close the 3 point gap. In the second last match off Garrett faced strong opposition in the form of Canada’s Derek Kibblewhite. After losing the first hole to Garrett, Derek reeled off a string of 7 consecutive pars to be 3 up after 8 (despite Garrett being well under his handicap at that stage). Garrett rallied with 4 pars in the next 6 holes, and with Derek going off the boil a bit the game swung to Garrett’s favour. A close match ended on the 18th with a 1 up victory to Garrett. By that stage the World Team had also amassed enough points to successfully defend the trophy they had won two years earlier. The final score of 14½ to 9½ didn’t reflect how tight the competition actually was.

Like all blind golf events the role of the sighted guide is essential. Garrett was very fortunate to have been able to be guided by Stellenbosch teaching professional, Erich Kliem. At each morning’s session on the driving range Erich was able to see how Garrett was swinging, and give him simple swing thoughts for the day. Erich’s ability to accurately align Garrett together with his calm nature on the course and ability to assist was strategy contributed greatly to Garrett’s success.

Erich and Garrett with the Vision Cup

The event was played in a wonderful spirit, and sets the stage perfectly for the return match to be held in the USA in 2017. 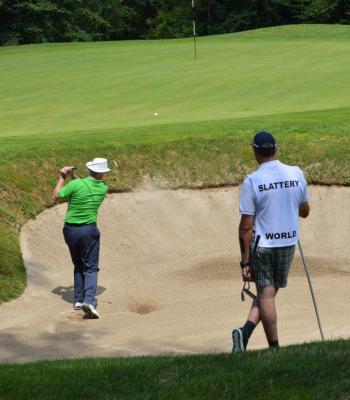 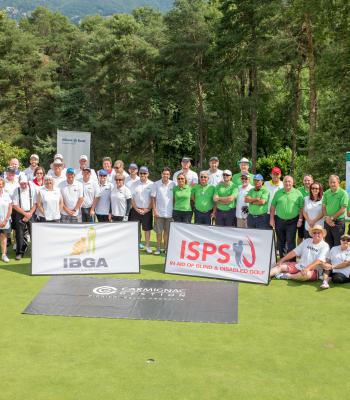 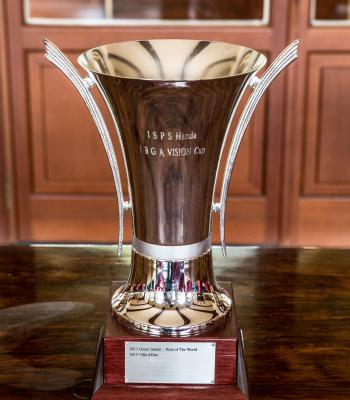