With 23-year-olds players struggling a little by their own high standards on the front nine, they upped the pace on the inward half in a ding-dong battle to the end.

However, a thundering tee shot and an excellent approach set up the winning birdie and a closing round of 77 for Slabbert. The final putt came at the back-end of a superb seven-iron out of the rough that braked about 15 feet behind the hole.

While Slabbert’s putt for eagle burned the edge of the cup, the birdie was just a tap-in formality and a three stroke victory on 12-over-par 225 was secure.

Schuhknecht started the final round one stroke back and levelled the score with a birdie at the first. The one-armed world match play champion missed birdie chances at the final three holes, though, which cost him a chance of forcing a play-off and he closed with a 79.

Defending champion Josh Williams from Canada closed with an 80 and shared third on 231 with two-time champion Iglin Grobbelaar, whose 74 was the low round of the day.

Paul Roos Gymnasium matriculant Charl Theron and Irishman James Hourigan, who lost both legs beneath the knee in a major car accident five years ago, shared fifth on 233.

Slabbert was thrilled to return to the winner’s circle for the fourth time in five years.

“It’s great to win again after Josh pipped me to the post last year,” said Slabbert, who plays off a plus-one handicap at The Els Club-Copperleaf.

“It wasn’t hard to sleep on the lead, but I can assure you I wasn’t thinking win number four early this morning when I dropped a shot on the first hole and made an ugly six at the par-five.

“Especially not with Reinard right on my shoulder. I made a few unnecessary drops early on which meant the pressure was on all day.

“Reinard stayed hot on my heels, but unfortunately he missed those three birdie chances at 16, 17 and 18 and that ultimately was the difference between the two of us.”

Slabbert had Kim Williams, one of South Africa’s top women professionals and a winner last year on the Sunshine Ladies Tour, on the bag and thanked her for carrying him to a podium finish.

"Kim was fantastic during the whole tournament,” he said.

“She kept me calm and focused out there, even though I didn't have the best of starts, and she just focussed my energy on the job ahead.

“I'll be back and I'll try and post a lower number on the scoreboard next year," added the winner, who is working towards earning himself a PGA teaching diploma.

Having no prosthetic aid like the leg amputees, golf is a harder game for the competitors who have lost an entire arm. Yet, this natural right-hander regularly drives the ball over 300 metres with his left arm, has a delicate touch around the greens, and has already broken 70.

“Reinard is playing the best golf of his career at the moment and I won’t be surprised if he defends his world one-arm match play title next month,” Slabbert said.

“My ultimate goal is to try and improve my golf and qualify for the Sunshine Tour,” Schuhknecht said.

“Q-School is on the horizon at the beginning of next year or the year after that.”

That's how determined he is. It would, of course, be a remarkable feat but don't put it past him.

“I struggled a bit on day one with an 81 but then shot 77 and 76, and I played the last nine holes in level par,” said the teenager, who suffers from arthrogryposis, an incurable congenital joint disease.

“This was my fourth SA Disabled Open and I learnt a lot, especially from Josh,” he said.

“He gave me some putting tips after my disastrous first round. I kept berating myself for that opening 81 until my dad Marius, who caddies for me, told me on the sixth hole just to shut up and get on with it. And he was right. I changed my mind set, and played really well.” 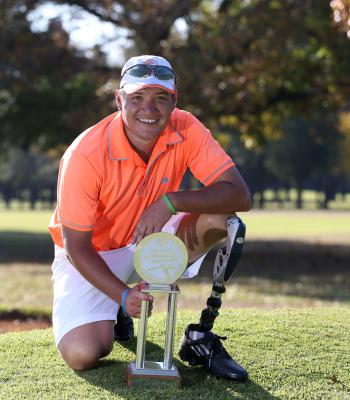 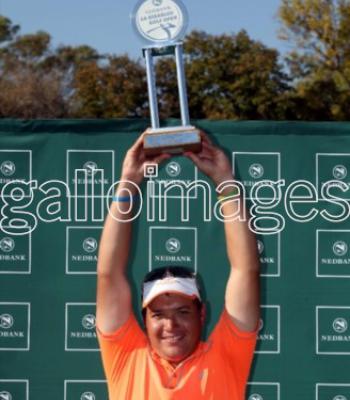