TSHWANE, 5 May 2014 - Three-time winner Daniel Slabbert took over the lead in the Nedbank South African Disabled Golf Open at Zwartkop Country Club and immediately paid tribute to his caddie, Sunshine Ladies Tour player Kim Williams, for the great help she has been giving him.
"Kim's been amazing," said the leg amputee after signing for a two-over-par 73.
Slabbert tops the leaderboard at 148, with big-hitting "one-armed-bandit" Reinard Schuhknecht second after carding a 74 and defending champion Josh Williams from Canada a further two shots adrift on 151.
“It's all about the game plan and course management when you've got someone as professional as Kim caddying for you,” Slabbert said.
Sunshine Ladies Tour champion Williams is currently completing her PGA teaching professional diploma and working as a caddie helps with the hours she needs to put in for her practical.
“She just reminds me to keep it simple; centre of the fairway, middle of the green, percentage golf. And don't try and be a hero. I hit the ball really well from tee to green,” Slabbert explained.
“On the greens, I felt like I was getting pace and break spot on - again with Kim's help - but the ball refused to drop. That was frustrating, but she came to the party again. She kept telling me what’s done is done and to just forget it. That helped to keep me calm and focussed.”
Slabbert won three straight SA Disabled Opens in 2011, 2012 and 2013 and had lined up his fourth title when the Canadian overhauled him in the final round to clinch victory at Zebula Golf Estate
His round included 15 steady pars, a birdie, a bogey and a double at the 17th when he found water with his tee-shot.
“I felt I hit the perfect wedge, but a gust of wind suddenly came up,” he said. “The ball cleared the river, but fell back in the hazard. Just a bad break, really.”
Schuhknecht, the reigning World One-Arm Match Play champion, was out in 40, but rallied with three birdies in the last five holes to come home in 34 strokes.
The lanky Vanderbijlpark player lost his right arm at age 14 when he misjudged a dive off a roof into a swimming pool and got tangled up with 11 000 volts of powerlines. He was electrocuted and nearly died and the amputation that followed brought to an end to a promising rugby career.
He took up golf, which wasn't easy for a natural right-hander who now only had a left arm.
But he's made amazing progress and now, 12 years down the line, he is within striking distance of winning his first Nedbank SA Disabled Golf Open title.
A powerful striker, the length he hits the ball is amazing. Against the wind at the par-5 16th, Schuhknecht mailed a three-wood from 250 metres out to with four feet of the cup. He brushed the cup with the eagle attempt, but tapped in for birdie.
“That was a career best approach from that far out,” said Schuhknecht, who averaged 378 meters during a Re-Max Long Drive contest in Jamaica in 2010.
Williams’s 79 was a long way off his best round of 65 at his home club in Canada, but also rallied down the back nine at Zwartkop after turning 10 over and completed the second loop in one under.
“The three of us are poised for a tight finish and it should be an interesting final round,” said the 30-year-old lefthander.
The next best players - Iglin Grobbelaar and Charl Theron - after the leading three are well off the pace on 15 over par 157.

Daniel Slabbert and Kim Williams during the second round of the Nedbank SA Disabled Golf Open; credit Carl Fourie 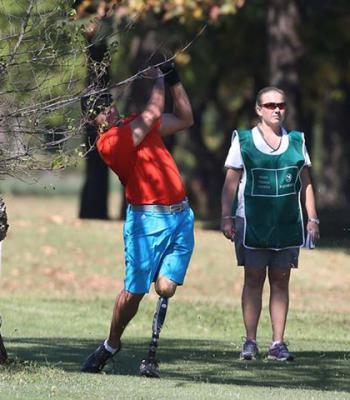