JOHANNESBURG, 15 April 2016 - Who would have guessed that the world’s number one ranked wheelchair tennis player Stephane Houdet would find his golf swing between back-to-back victories on the UNIQLO Wheelchair Tennis Tour in South Africa?

It was a casual look at a journalist’s laptop in the media centre during his post-victory interview at the Gauteng Open that stopped Houdet in his tracks. The reason for his excitement was an image on the screen of four-time Nedbank SA Disabled Golf Open champion Daniel Slabbert in mid-swing.

“Look at the golf swing,” the 15-time Grand Slam champion exclaimed. “Who is this guy? How can I meet him? We have the same leg! Can you get him to Ellis Park?”

“Some people might final it hard to grasp why Stephane would interrupt his bid for a third SA Open title to have a golf lesson with Daniel, but Stephane was the top ranked disabled golfer in Europe and France before he switched his clubs for rackets, balls, lucrative endorsements and prize money,” Vorster said.

“In fact, his stiff left leg prevented him from travelling long distance, so he intentionally had the leg amputated above the knee so he could be fitted with a prosthetic. It was during his rehabilitation that he discovered wheelchair tennis and his natural talent for the sport.

“Ever since he competed in our Nedbank SA Disabled Golf Open Championship more than 10 years ago, he kept contact and always calls when he comes to play in the ITF events in South Africa. He might be the best in the world in wheelchair tennis, but his first love will always be golf.”

The lesson between the two SA Open champions was set for midway through the SA Open at Ellis Park Tennis Stadium, sponsored by the Airports Company South Africa.

Slabbert found a piece of grass in the parking area next to the courts that was big enough to swing a club and got down to business.

It took him less than a minute to pin point the Frenchman’s problem.

“You are trying to swing like an able-bodied golfer,” Slabbert said. “All leg-amputees make this mistake .We all try to swing it like we used to, but the prosthetic leg doesn’t give you the same rotation. Your foot doesn’t turn and you fall over. You have to swing it like Gary Player. If you walk through your down swing like Gary, you’ll keep your balance.”

It took less than five swings for Houdet to master Slabbert’s advice.

“I can’t believe it could be that simple,” said the 45-year-old Houdet. “I’ve watched Gary Player for years and I knew exactly what Daniel meant. I didn’t expect it to work, but it did and it felt so natural, so comfortable.

“And I am still on my walking leg, not the one I play golf with. I can’t wait to get home and try Gary’s swing with my golf leg. The reality is that I’m nearer the end than the beginning for my career in tennis. When I retire, I hope to take up competitive golf again. It’s always in the back of my mind and it would be great to start the senior tour with the perfect swing.”

When Houdet won the SA Open for a third time last Sunday, he levelled three challenges at Slabbert.

“I did what I came to South Africa to do, Daniel - I have beaten the best in the game,” he said. “So, from one SA Open champion to another I challenge you to do the same at the Nedbank SA Disabled Golf Open Championship. But then you must take your game to the next level.

“Eugene told me you dream of taking your game on to the pro stage and you are definitely talented enough to compete with the pros. There is nothing to hold you back, except fear of failure. Fear is something we all have to face, but there is no shame in failure, only in not trying. And, when I return to defend my ITF titles next year, you better be ready for my Gary Player swing.” 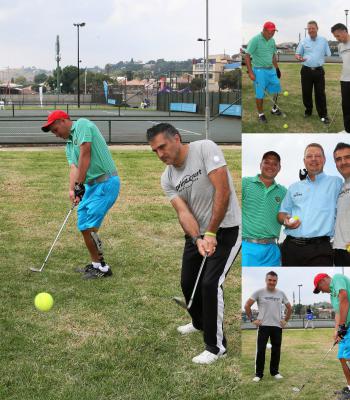