Shaw’s victory was the product of patience and perseverance. Trailing Dry by three overnight, a quadruple-bogey 9 at the 3rd-hole was the main contributor to his falling a further two shots behind at the turn.

He dug deep, however, and began the inward-nine with four consecutive pars before a timely birdie at the par-4 14th.

Comparatively, Dry dropped three shots over the same stretch which set the stage for a thrilling conclusion.

In the end, Dry’s title-bid was derailed by some errant shots at untimely moments. Four dropped shots over the final three-holes was a cruel end to what had been an impressive display tee-to-green from the leg-amputee for large parts of the 36-hole event.

The back-nine and indeed the day however belonged to Shaw and although he closed with bogeys at his final two holes, he did enough to secure the title.

Blind golfer Morne Els completed a wire-to-wire victory in the Physically-Disabled Stableford title as he claimed a three-point victory over JJ Joubert.

Els played consistent golf throughout the 36-hole event, following up his first-round 32 point-haul with a further 33 points in the final round.

Els’ front-nine was highlighted by a three-pointer at the par-4 7th while four two-pointers saw him make the turn with 15 points to his name.

18 outward-nine points from Joubert meanwhile helped him erase the deficit and ensure that the tournament went down to the wire.

Els flipped the script on the second-nine - earning three-pointers at the 10th, 15th and 16th respectively to sign for 18 second-nine points.

Though Joubert reeled off three three-pointers of his own on the back-nine, he was undone by two zero-pointers and two one-pointers and had to settle for 15 second-nine points which  allowed Els to complete the three-point victory.

Kosie janse van Rensburg’s final round of 85 helped him complete a six-stroke victory over Albie Louw in the Deaf Medal.

Louw is to be commended for his tremendous fight-back. Having shot an opening-round 92, he rebounded to shoot 44 on the front-nine in the final round. A birdie-3 at the 11th was the highlight of an even better back-nine of 39 which helped Louw pip Janse van Rensburg by two shots on the day.

Janse van Rensburg made a sluggish start to his round as he made the turn in 45. He too was much-improved on the back-nine, carding five pars including a magnificent four at the tough 10th-hole.

Nkomo overcame a sluggish start to a three-pointer at the fourth before two-pointers at the 5th, 6th and 8th which helped him turn with nine points to his name.

Nkomo played tremendous golf on the second-nine - notching no fewer than four three-pointers. He punctuated a remarkable turnaround with a par for four-points at the last and a second-nine tally of 22 points, indicative of a wonderful temperament and focus.

Goliath meanwhile notched 13 back-nine points and 23 points on the day.

In the ladies’ section of the Deaf Stableford, Zee Zee carded matching nines of 13 points. In all her round featured two three-pointers and six two-pointers which suggests that Zee is developing into a more consistent competitor and is a bright prospect for the future.

Edna Huys’ final-round of 14 points gave her a two-round tally of 36 points and sole-possession of 2nd spot in the ladies’ section of the Deaf Stableford.

All in all the Metropolitan Disabled Open was a resounding success which not only showcased the immense talent within the South African Disabled Golf Association but also the tremendous character each of the competitors possess.

Our thanks to Metropolitan Golf Club for hosting us at their wonderful club - the course was outstanding and the staff’s hospitality equally fantastic.

To Western Province Golf and Golf RSA, thank you for the unwavering support of South African Disabled Golf - it’s appreciated by members and staff alike and helps make wonderful events such as the Metropolitan Disabled Open possible. 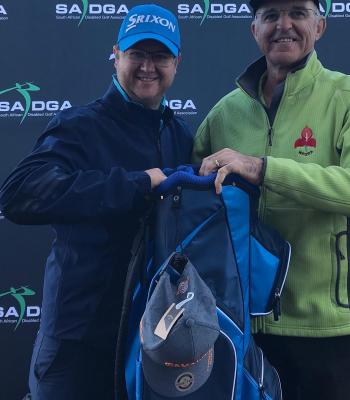