MAGALIES PARK, 15 May 2018 – Thick mist wrapped itself around the Magalies Park Golf Club like goose feather duvet and forced a two-hour delayed start to the second round of the Canon SA Disabled Golf Open, but there was smiles all around when the fog lifted to reveal sunshine.

The heat was a welcome change from the sweeping rain and icy winds of Monday’s first round and the bulk of the 70-strong field made the most of the warm conditions to climb the leaderboard.

Overnight leader Mike Browne began the day with a six shot lead and the 38-year-old right leg-amputee stretched his advantage to 10 shots with successive rounds of 78.

Browne had bogeys at dropped four shots on the front nine and had another quartet coming home, but birdies at 10 and 15 took out some of the sting. The former British soldier admitted that he battled to come to grips with a significantly shortened set-up.

“I wasn’t very happy treading water with another 78, but it is what it is,” said Browne, who has been competing on pro circuits in Europe and the United States for the last 18 months.

“I expected to play a lot better given the shortened course, but I was between clubs quite a lot. You couldn’t really hit full shots and I battled with the distances and club selection. The greens have so many slopes and they are fast, so anytime you hit it on the wrong side, you pay for it.

“It was definitely a short-game day and I just wasn’t sharp enough. But I’m having an incredibly great time out here. This is a top notch championship. It is very well organised and run extremely professionally. I would encourage anyone with a disability who loves golf to make the trip to South Africa to compete in this tournament. ”

Two-time former champion Iglin Grobbelaar was among the climbers, though.

The Les Autrés golfer from Clovelly shaved six shots off his opening round and an 80 netted him second place on 166.

“I made good birdies at five and 13, but it should have been six or seven shots better,” said Grobbelaar. “It should have been a lot better, but I made two very poor doubles at the first and 10th and two stupid bogeys at 14 and 16. I had 10 lip outs from under 12 feet and that was frustrating, because I’ve played this course since I was a youngster. I’m 10 shots back, so I’ll have to play aggressively and fire at the pins if I have any hope of catching Mike.”

Daniel Slabbert returned an 82 to slot into third place, a shot behind Grobbelaar but the four-time champion had a dramatic start to his round.

As he stepped up to the first tee, a titanium bolt in the knee of his prosthetic leg that lets him bend the leg, snapped right off. “I was basically planted where I was standing, not able to move and definitely not able to play,” said Slabbert. “The organisers sent someone to my house in Pretoria to get my old leg and the guy got here in record time, so I could tee off in the final group.

“I hadn’t used the leg for two years, so I had no idea how it would behave. I had a couple of shocking holes out there, but overall, I’m extremely happy that I could hang on to third. I’m really pleased that I’m still in the fight, even if I’m a long way off.”

Dean Ferreira from Pretoria also doubled up and two rounds of 84 earned the leg-amputee from Pretoria the final berth in the leading group on 168.

Ignation Douries of the First Swing Programme had to wait 17 holes for his first birdie, but a second successive 85 will see the 19-year-old Citrusdal golfer start the final round in fifth on 170.

Chilean arm-amputee Hernan Garcia moved to sixth with rounds of 89 82 and he finished one shot ahead of leg-amputees Trevor Reich (85-87) and Robin Singh (91 81) and double leg-amputee James Hourigan (87 85).

Daren Hanekom went 11 shots better with a second round 80 to rocket to first in the SA Deaf Championship. He leads by seven shots from fellow First Swing Programme coach Charles Williams. Albano das Santos made 41 points to remain in front in the Stableford Competition on 71, while 13-year-old Kwazi Mhlangu moved within two points of the U-23 Division Stableford leader Shane le Roux after posting 32 points in round two.

Top Dutch player Tineke Loogman overtook debutant Charlene Pienaar for the lead in the Ladies Stableford Competition with a score of 46 points, while Garrett Slattery took the top spot in both the Medal and Stableford Divisions in the Visually Impaired Medal Competition with a second round 89, worth 39 points for the 20-handicapper.

PHOTO 2 – Two-time champion Iglin Grobbelaar got within 10 shots of the lead with a significantly improved 80 in round two of the Canon South African Disabled Golf Open at Magalies Park Golf Club; credit Dana Eitzen / Canon.

PHOTO 3 – Four-time champion Daniel Slabbert was left leg-less when his prosthetic leg snapped on the first tee, but the Pretoria golfer roped in an old leg and finished third in round two of the Canon South African Disabled Golf Open at Magalies Park Golf Club; credit Dana Eitzen / Canon. 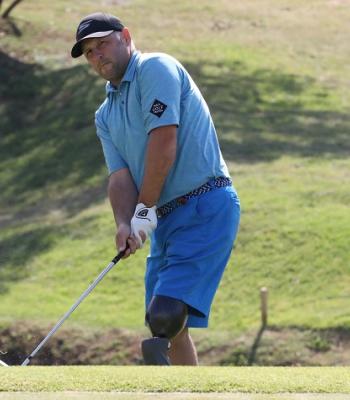 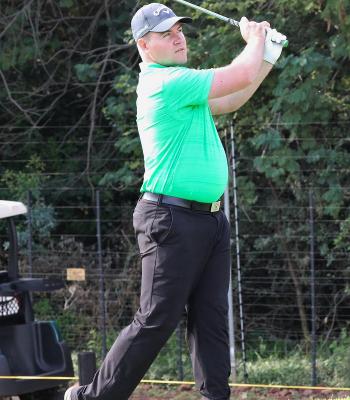 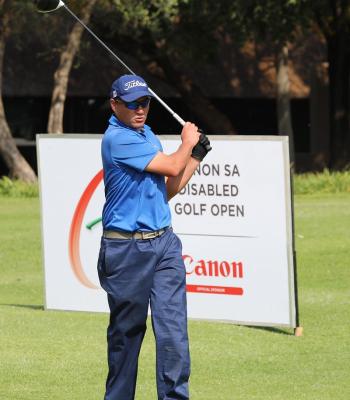