Johannesburg, South Africa. February 2017 - Port Elizabeth-born and raised amputee, Shaun Bakker will return home to South Africa from the United Kingdom to compete in the prestigious 2017 Canon South African Disabled Golf Open, which takes place in Cape Town in May. He has confirmed his participation in the event which will see some of the top local and international disabled golfers compete in the 19th annual edition of the international tournament which is hosted annually by the South African Disabled Golf Association (SADGA). In 2016, 30% of the field boasted single figure handicaps and more than half of the competitors have handicaps of 18 or lower.

Canon South Africa, which has been a proud sponsor of SADGA for many years, has proudly taken the reigns as the official sponsor of the South African Disabled Golf Open for 2017. “I am thrilled to be coming home to South Africa for the tournament. I can’t thank SADGA enough for hosting such an amazing tournament and giving me my hunger for competitive sport back again. The camaraderie experienced among the players combined with the competitive nature of the talented golfers make for an inspiring experience that lives long in the hearts of everyone who takes part,” says Bakker.

Bakker started playing golf at the age of 12 and was a member of the Port Elizabeth Golf Club. He lost his leg at the age of 21 due to the damage caused by a cancerous tumour in his tibia. He was an avid sportsman until that point playing cricket, rugby and water sports.
“I thought my days of competitive sport were behind me until I entered my first South African Disabled Open at the White River Country Club in Mpumalunga over 12 years ago,” he recalls.

He was so inspired by the experience that he began assisting with coordinating regional events for SADGA in Port Elizabeth as well as arranging a large annual fundraising golf day enabling funds to be raised for local amputees in Port Elizabeth.
In May 2005 he relocated to England and began working in the golf Industry. There he has enjoyed many great opportunities to compete in tournaments in England and all over Europe. His participation in the 2017 Canon South African Disabled Golf Open will be his third.

Some of his notable achievements include finishing third place in the Scottish Disabled Open – Westerwood Golf Course in 2005; representing Team Great Britain in the Handigolf Team Championships in 2011 in Malmo Sweden; taking the runner up position in the 2011 BALASA Championships, as well as various top ten finishes in tournaments around Europe including the Algarve Open, French Open and Swedish Invitational.

“We are excited to have Shaun Bakker back on home soil to compete in the 2017 Canon South African Disabled Golf Open. We have some very inspiring and talented players in this year’s field,” says Reinard Schuhknecht, Brand Ambassador for SADGA. 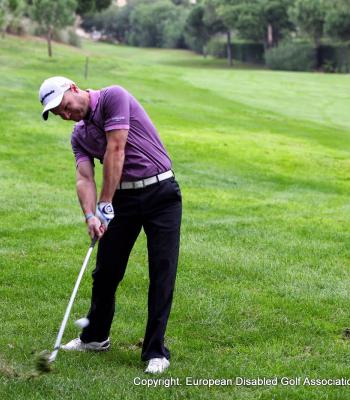