CAPE TOWN, 9 May 2017 – Big-hitting American Chad Pfeifer is primed to start his title defence in the Canon SA Disabled Golf Open at King David Mowbray Golf Club from 15-18 May.

“Six days to kick off and I’m already champing at the bit to get on that plane to Cape Town,” said the leg-amputee from his home in Boise, Idaho.

“I’m really excited to go up against a really strong international field, to see some of the best spots in Cape Town and hopefully bring home more silverware this year.”

Pfeifer staved off former champion Josh Williams from Canada in wire-to-wire style in his debut at Zwartkop Country Club last year, but he believes it will be a lot harder this year to go rack up successive titles in the South African Disabled Golf Association’s flagship event.

“With the World Cup of Disabled Golf being played at the same time, we have the best competitors from 13 nations in the field and everyone is coming to win,” said Pfeifer.

“There are a lot of internationals that I’ve never met or played against, so that unknown element is pretty intimidating. But Josh will be hell-bent on revenge and he has great support in Bob MacDermott, Matt Hallat and Johannes Granes.

“Manuel de los Santos from the Dominican Republic and Juan Postigo from Spain were on our tails last year and are both back and the South Africans like Herman (van Wyk), Ben (van Zyl) and Byron (Calvert will throw everything but the kitchen sink at us to keep the trophy on home soil. Plus, we’re playing at altitude this year. Thankfully it’s the same for everyone. Hopefully I shake the jetlag quickly, get my sea legs on and give myself a chance.”

Golf was not Pfeifer’s sport of choice as a young gun; in fact the three-sport high school athlete who was good enough to play collegiate baseball, considered golf as “a sport for old people”.

A former corporal in the Army's 3rd Airborne Battalion, Pfeifer was deployed to Iraq as part of Operation Iraqi Freedom in 2006. Within a year, he lost his left leg when the vehicle he was driving set off a landmine.

“I went through the same torture that all amputees endure while in rehab,” he said. “Why did this happen to me? How was I going to cope? Would I be able to get a job? Would a woman ever want to marry me? There were plenty of times when I felt I didn't have anything to live for.

“Then a fellow soldier told me to go to the driving range with him and hit some balls. I balked at the idea but eventually relented. Halfway through the first bucket, I hit a ball on the sweet spot and it just kept going. I was hooked right then and there and I've had the bug ever since.”

In 2015, Pfeifer became the first veteran amputee to compete on the Web.com Tour and he has been competing on several satellite tours at home in the last two years.

“Given everything I have achieved, winning the SA Disabled Golf Open meant the world to me,” he said. “Josh promised me this is one of the best golf tournaments in the world and I experienced it for myself. It delivered on all points. The hospitality, the organisation and atmosphere is fantastic. I am so excited to be coming back and just maybe I can do a good enough job to take the trophy home one more time.”

The Canon SA Disabled Golf Open will be contested over 54 holes in various divisions that features Leg Amputee, Arm Amputee, Les Autres, Visually Impaired, Deaf and Wheelchair. The player with the lowest aggregate gross score is crowned the Overall Champion.

The World Cup of Disabled Golf will feature 12 teams and will be contested over 54-holes of stroke concurrent with the three rounds of the Canon SA Disabled Golf Open. The final rounds – Foursomes and Fourballs – will be played on 19 May. 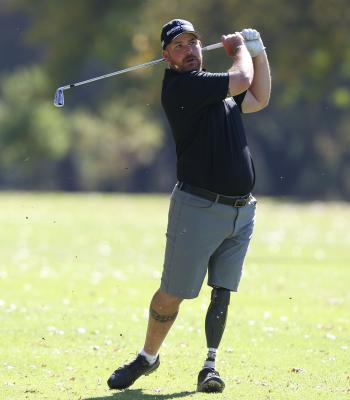