TSHWANE, 4 May 2016 – American Chad Pfeifer rolled in a clutch putt for par at the final hole to celebrate a wire-to-wire victory in the Nedbank SA Disabled Open, while 19-year-old Stellenbosch University student Charl Theron upstaged South Africa’s big guns to top the local challenge with a tie for fourth on Wednesday.

Pfeifer shot a final round one-over-par 72 to edge out 2014 champion Josh Williams by one shot to lift the trophy on a winning score of even-par 213 at Zwartkop Country Club.

Juan Postigo from Spain returned an 80 to take third on 225, while Theron closed with a 75 to grab a share of fourth on 231 to tie celebrated leg amputee Manuel de los Santos from the Dominican Republic, who shot a final round 81.

Pfeifer said he ticked a lot of boxes with this victory.

“This means the world to me,” Pfeifer said. “I wanted to raise awareness for disabled golf outside the United States, I wanted to put this championship on the map and I wanted to win this title since Josh told me about the Nedbank SA Disabled Open last year.

“Josh said it’s one of the best tournaments in the world and I was really excited to come and see for myself. It has certainly delivered on all points. The hospitality and the organisation of this event is a cut above many of the disabled and professional tournaments I’ve played and atmosphere was fantastic.

“It was the first time I competed against Juan and Manual and I really had to work for this victory. I am very proud to be called one of its champions. I met Ben van Zyl, who has won this title seven times and still plays a mean game. It will take a lot of return trips to equal that record.”

Pfeifer began the final round with a one shot lead over Williams and the former US Army corporal had to dig deep to stave his long-time rival for victory.

“I expected Josh to come for me, because we’ve gone head-to-head in the past,” said the big-hitting Texan. “We were tied for the lead a couple of times on the front nine and again on the back nine, but I had a one shot lead with two to play.

“When he holed that 15-footer for birdie at 17 for a second day running, I thought ‘here we go, play-off’. The 18th is a long par five and I still fancied my chances at 18, but we both messed up our third shots. I finished under the trees on the left of the green and he ended up in the greenside bunker.

“I landed in some soggy grass and the ball didn’t come out well and my chip finished in the bunker, but I had a really good lie. Josh didn’t hit his trap shot great and still had an eight-footer left to save par, so I knew I had to get it close. I splashed out to three feet and when he missed the par putt, I knew I was just a putt away.

“I was pretty nervous over that putt. I really wanted to win this title and it was a great relief to get it done. I have thank all the First Swing Programme (FSP) kids and all the other supporters that cheered us on over the closing holes, and especially at 18. Their support meant so much for all of us.”

Theron from Boland was one of the FSP learners who followed the leading group.

“It was such an amazing experience for us to have guys like these playing here in our championship,” said the B.Com Accounting student.

“They are in a class of their own and that is what we aspire to be. “These guys have such amazing golf skills and off the course, they are incredibly generous with their time and their advice. Manuel even coached Simu (Mdudu) after every round.”

Theron was pleased as punch to serve up his best performance yet in five starts after almost not entering this year’s championship.

“It’s probably because I decided so late that I would play, that I never had time to stress this year,” he said. “I have a heavy workload at varsity and have exams are coming up, so I didn’t decide until last week to play. It was a great tournament and I’m really excited about this finish. I hope this will inspire a lot of kids in the FSP and we will have even more competing next year.” 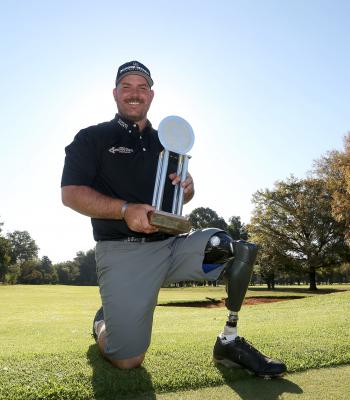 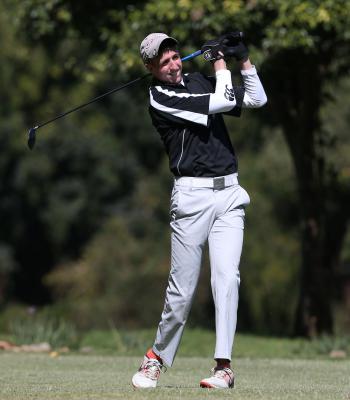