My only handicap is golf, says Theron

TSHWANE, 3 May 2015 - Arthrogryposis. Suffering from this incurable congenital joint disease is like living with a death sentence, but for 17-year-old Charl Theron, being born with frozen muscles was just another of life’s challenges to overcome.

On the eve of the 2015 Nedbank SA Disabled Golf Open, the two-handicap Paul Roos Gymnasium matriculant is looking forward to flaunting his golfing prowess at Zwartkop Country Club.

“I believe in the old saying that when life hands you lemons, make lemonade,” Theron said.

“We all wonder at some point ‘why me’, but I believe life is far too valuable to waste. There IS life beyond disability and the only handicap that should matter is your golf handicap. As for the rest, you do the best with the cards live deals you.”

In fact, he made quite an impact on the junior circuit over the last nine months.

He was selected to the Boland Schools team and looks likely to make the grade after an impressive performance at the recent trials.

Theron’s star is definitely on the rise and he will start his fourth appearance in the South African Disabled Golf Association’s (SADGA) flagship event with a healthy dose of confidence.

‘I think I have really learned a lot in the last year and I’ve also matured as a player,” he said. “I don’t feel the nerves as much as in the past and I feel capable of competing against the best.”

Playing off a six handicap, he took fifth overall and second in the Les Autres Division last year and a more experienced Theron is back and poised to impress.

“We are all very privileged to be given the opportunity to compete in the Nedbank SA Disabled Golf Open with the top disabled golfers in the country,” he said.

“The results are important and the experience is very beneficial, but we also learn a lot outside the ropes in terms of etiquette and rules and I believe the whole experience helps us to become more well-rounded golfers.” 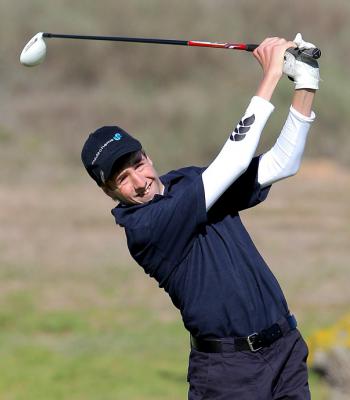