"My amputation is nothing to hold me back" - Mike Emanuel

A gifted athlete who played high-level sport as a youngster, a freak accident halted Mike Emanuel’s sporting endeavors at an age where most sportspeople are nearing their peak. A leg-amputation and some three decades later, Emanuel’s sporting prowess is as evident as ever.

Growing up in the Durban suburb of Westville, Emanuel immersed himself in the wonderful world of school sport. If time allowed, Mike played it. Not just played, excelled.

“I really had a good school career; I played a lot of sports. I was fortunate enough to play 1st XV rugby at Westville Boys’ High School, captained 2nd XI cricket, swam and played hockey for the school,” Emanuel reflects.

“I basically played any sport that was on offer. I Played waterpolo when we weren’t playing cricket, did athletics. I was fortunate to have done quite well in the discus throw where I threw for Durban & Districts through my high-school career.

If it was indeed fortune that shaped his early years as an athlete, what transpired in his early 20s was anything but.

“I was playing Collegians 1sts, we were playing down in Kokstad at a rugby week. My foot got caught in a divot and as I turned I just snapped all the ligaments in the knee. It was quite horrific.”

Surgery followed and the torn ligaments were replaced by artificial ones. Just three months later Emanuel’s body rejected the ligaments and they needed to be taken out. Screws were left in the knee, however, and led to a period in Emanuel’s life that was nothing short of horrifying.

“Somehow those screws introduced septicemia into the bone and I struggled for a six or seven year period where I spent three to four months of every year in hospital in some form of septic coma.

“There were periods of days and weeks where I actually didn’t recognise or know anybody. I was so septic that I was totally out of it.”

During one such coma six or seven years after the whole ordeal began, doctors advised Mike’s wife that if they didn’t amputate his leg then and there he’d likely be dead by morning.

Having led such an active life, amputation was an understandably bitter pill to swallow.

“I was basically at or maybe hadn’t reached my sporting peak yet and to have had that happen it was tough to accept. Make no mistake, accepting an amputation of that sort when you are that active is never going to be an easy road to travel.”

Despite everything, Emanuel is incredibly philosophical about it all and points to a chance encounter which put things in perspective.

At a physio appointment with Joyce Morton, Emanuel saw a man of a similar age who was wheelchair-bound. Morton’s explanation initiated a key mindset shift for Emanuel.

“She said ‘you won’t believe it, from being a perfect 100% able-bodied person, a car accident had ridden him to a wheelchair for the rest of his life.’

“He was going to be in that wheelchair no matter what and that was the singular most motivating thing for me to realise that my amputation is absolutely nothing to hold me back.”

Fast-forward to the present day and you need only look at Mike’s exploits on the golf course to learn that he’s stayed true to this mindset.

Having played golf to an eight-handicap prior to his amputation, Emanuel didn’t touch a club again for 25 years. Since beginning again a few years ago, Emanuel has got down to

At the Irene Disabled Open he announced himself to the SADGA, winning his very first event by six-points with a two-round tally of 74. Despite the success, Mike was self-effacing in his assessment of the victory.

“Was the win expected? Most definitely not! In round one I shot 88 or so and during a 12-hole practice the day before I probably shot 88 so I was completely blown away,” he says.

A victory is a victory though and should Emanuel repeat the feat on home soil at the KZN Disabled Open, he’ll have a hard time convincing us that it was the product of good fortune and not natural sporting talent. 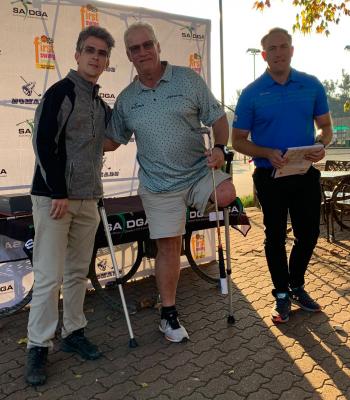 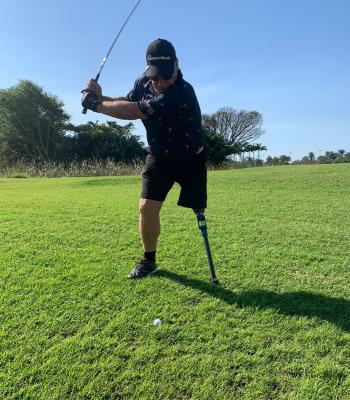