Playing in the company of SADGA Chairman Enver Hassen and fellow leg-amputee Trevor Reich, Moorgas made a fantastic start with two pars in his first four holes. Four double-bogeys in his next five holes, however, proved a test of his character but Moorgas was equal to the task.

A topsy-turvy opening nine was quickly forgotten when Craig made a phenomenal par at the par-5 10th, KDM’s stroke-1. The ship was officially righted with a second consecutive par and not even a double-bogey at the 12th could halt the momentum Moorgas had built up. A third par in five holes at the 14th followed and a bogey at the long par-4 15th signalled that a special nine holes could be in the offing.

Just when Moorgas seemed set for a barnstorming finish, he carded an almost inexplicable double-bogey at the par-3 16th. But what separates the good players from the great players is the ability to put disappointing setbacks behind them and Moorgas did just that with a bogey at the penultimate hole.

His crowning moment came at KDM’s tough finishing hole. Par is always a good score and on that particular hole - measuring over 350m and with water left of the green ready to swallow an errant approach - par is exceptional.

The card read an inward nine of 43 shots which propelled Moorgas to one of his most memorable days out on the course.

The day, however, undoubtedly belonged to Craig Moorgas who continued his recent rich vein of form. Long may it continue. 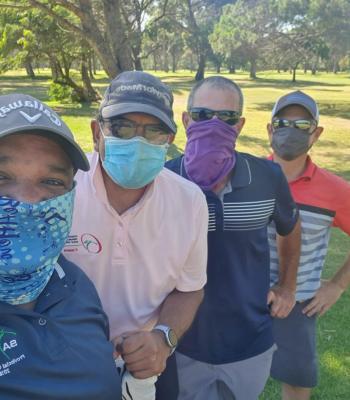