Team South’s Craig Moorgas’ return to the SADGA Provincial Challenge after an absence of nearly a decade - is the culmination of hard work and some help from friends along the way.

SADGA Executive Director Moorgas has achieved greater consistency throughout his game over the past year. The leg amputee attributes this to playing more competitive golf on a regular basis.

“My strides over the past year can be attributed to me spending more time on it,” says Moorgas.

“I’m practicing more and try to play at least once a week in a good practice situation and around competitive golfers. Being able to play with Charles (Williams) and Daren (Hanekom) in a competitive environment has helped hone some of my game.”

Moorgas also remarked that work on his short-game with the help of Team South Playing Captain Trevor Reich has also paid off.

As for the best approach to the event itself, Moorgas believes positivity is the keuy.

“The team approach is a little different from strokeplay and trying to score your individual score. I think the key will be to just try and keep up with who we are playing in the matchplay situation,” says Moorgas.

“For me personally though it’s about trying to play my best game each day and trying to hit every shot positively.”

Having played team sport for the better part of 25 years - most notably on the wheelchair basketball court - Moorgas’ outlook on team sport and what it’s about will make him a valuable asset to skipper Pieter Verwey.

“Team sport and the camaraderie is what I enjoy most. I think there is one goal and the one goal is to beat the team you’re playing against but it’s about doing it as a single unit and not as an individual.”

Though it has been some nine years since his last appearance at the event, Moorgas left an indelible mark on the 2012 edition where he made a hole-in-one at Zwartkop Country Club. Craig’s son Jared also happened to be caddying for him at the event which made an already memorable moment extra special!

With his game rounding into form and an attitude well-suited to team golf, Moorgas could be set to once again leave his mark on the SADGA Provincial Challenge. 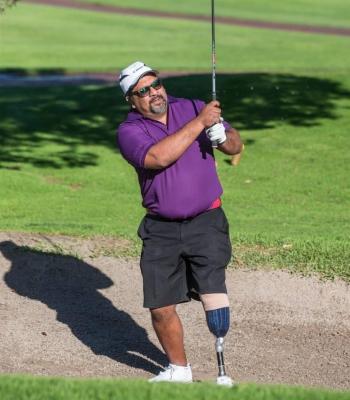