CAPE TOWN, 11 May 2017 – Reigning World Disabled Golf champion Bob MacDermott flew into the City of Cape Town ahead of a whole slew of global winners arriving this weekend to do battle in the Canon SA Disabled Golf Open from 15-17 May.

A total of 22 international competitors from 12 countries – who share a remarkable haul of more than 30 international titles – are primed to light up King David Mowbray alongside South Africa’s legends of the game with one goal only: to win one of the most coveted titles in disabled golf.

And the Canadian is the pick of the bunch.

Touted as the world’s most amazing golfer, MacDermott’s list of accolades could rival that of a PGA pro. The Saskatchewan native took up golf at the age of 30, but after surviving a brutal farming accident that cost him his left leg, left arm and right thumb, he has racked up more provincial, national and international victories than you could shake a stick at.

Among his many highlights, the former British Amputee Championship winner has won the annual Alberta National Pro-Am more than 10 times and the Belvedere Country Club Championship consecutively in 2003, 2004 and 2005.

Incidentally, the all-time course record 65 he set in 2003 still stands.

What should be worrying the rest of the contenders in this year’s Canon SA Disabled Golf Open is the double-amputee’s form. MacDermott has arrived on the back of yet another profitable season and he is undeniably one of the prime contenders in South African disabled golf’s flagship event.

The Alberta Sports Hall of Famer liked what he saw when he cruised the course at King David Mowbray Golf Club shortly after his arrival on Wednesday.

“When we played the SA Open and World Cup at Zebula in 2014, the course really favoured the long hitters and at high altitude, they could really let rip,” said MacDermott.

“King David Mowbray is horse of another colour. It’s not too long, it’s got a lot of dog-legs and it’s heavily tree-lined. A great leveller. It will reward the player who keeps it in the fairway and that gives me a chance. At 61, I can’t carry that little white ball so far anymore but I can still hit it straight and I’m good around the greens.

“It reminds me of my home course, Belvedere, and besides, I am partial to Parkland courses. Canada is still six feet under the snow, so I went down to Phoenix and played some Parkland courses to get match ready. I still have a great desire to win and I’m definitely liking what I see.”

MacDermott will be partnering with former SA Disabled Open champion Josh Williams in the second World Cup of Disabled Golf and he fancies their chances.

“I definitely back myself and Josh, especially at this course. We are both highly competitive and the better the competition, the deeper we dig,” said MacDermott. “Australia and South Africa beat us to the punch in the first World Cup at Zebula, so we have a score to settle.

“It’s great to be back in South Africa and have the chance to take in some of the famous sights like Table Mountain and to re-connect with old friends and make some new ones. Moreover, I look forward to see some of the young talent from the South African Disabled Golf Association First Swing Programme. Nothing is more rewarding than inspiring the next generation.” 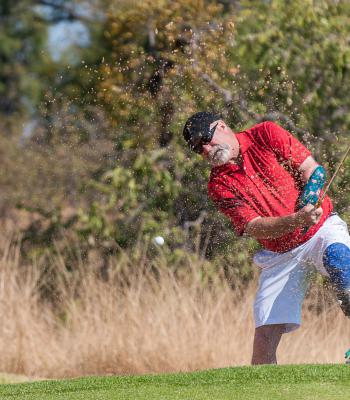