Kwazulu-Natal Disabled Open Round One Wrap

We wrap the first round action from the Kwazulu-Natal Disabled Open which took place at Mount Edgecombe’s The Woods course on Wednesday.

Whatever the tournament, whatever the course, David Watts has an uncanny knack for putting distance between himself and his nearest challengers. A round of 79 has earned the Les Autres golfer a four-shot lead over Robin Singh and Kelvin van Baalen respectively.

Since making his SADGA tournament debut at the Ebotse Disabled Open in April, Watts has been in imperious form. He began his KZN Disabled Open campaign with consecutive pars before his first birdie on the par-5 3rd. Though he relinquished two shots at the 5th and 6th respectively, a front-nine of one-over 36 was certainly steady enough.

By the lofty standards Watts has set in recent months, the homeward nine was more of a struggle. Bogeys at the 10th and 13th preceded an uncharacteristic triple-bogey 8 at the 14th. A ball lost in the long grass surrounding the green and a water ball to follow proved an examination of Watts’ character.

Despite bogeys at the 15th, 16th and 17th, a closing par ensured the Durban resident has a nice cushion heading into the final round.

“It was a very disappointing finish to the round but it was quite tricky out there today. My second-shots let me down on the back-nine and I left quite a few shots out there so tomorrow I’ll look to eliminate those mistakes,” remarked Watts.

“On the whole though my game is in a fairly good place at the moment so tomorrow I’m going to try to put myself in better positions with my second-shots and when I do miss the green, try to miss it in a good spot. Hopefully tomorrow will be a more solid performance.”

The stage is set for an intriguing final round in the Physically-Disabled Stableford with friends and Durban locals Sebastian Crawford and Mike Emanuel tied at the top after respective rounds of 33 points.

Emanuel made a bright start to his round: Three-pointers at the 5th and 6th complemented two-pointers at the 1st, 4th and 7th as the leg-amputee made the turn with 16 points to his credit.

A terrific par-4 at the 16th for as many points highlighted an inward nine of 17 points that also featured three-pointers at the 12th and 15th respectively.

Crawford meanwhile laid down an early marker over his opening nine. Three-pointers at the 2nd, 7th and 9th along with a further five two-pointers propelled him to a front-nine tally of 20 points.

Though he cooled off on the inward half, a three-pointer at the 15th and four more two-pointers ensured that he ended the day locked with Emanuel on 33 points.

Don’t count out Jodi Schultz for the title either, the Les Autres carded 31 points and is well-placed to make a run at the title in the final round.

Deaflympian Jay-Jay Botha opened up a sizable 29-shot lead over Albano Dos Santos after an opening-round of 76.

Botha’s opening-nine was solid as he mixed five pars with four bogeys en-route to a front-nine of 4-over par 39.

Three dropped shots in four holes after the turn wasn’t what Botha would’ve been looking for but a birdie-3 at the 17th helped offset some of the damage and ensured he posted the round of the day.

Deaf golfer Rhyno Snyman made a promising start to his round with two three pointers over his first four holes - at the 1st and 4th respectively. He kept his tally ticking over for the remainder of the nine as two-pointers at the 6th and 8th saw him turn with 14 points to his name.

Though he could only muster 10 inward-nine points, back-to-back two-pointers at the 12th and 13th helped combat a tough final few holes for Snyman. Nevertheless, 23 first-round points is certainly something to build upon in the final round.

Overall the players handled some tricky conditions well and will be confident of improving upon their opening round efforts in the final round. A lot can happen over 18 holes so the stage is set for an enthralling final round. 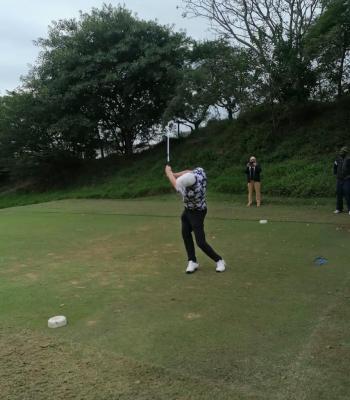 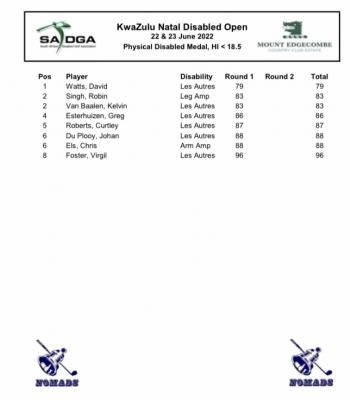 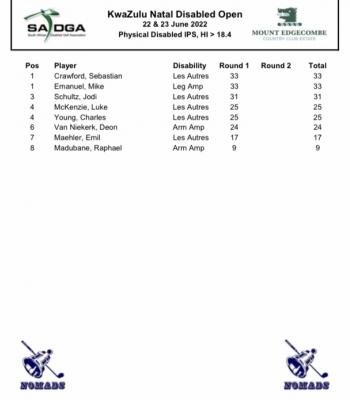 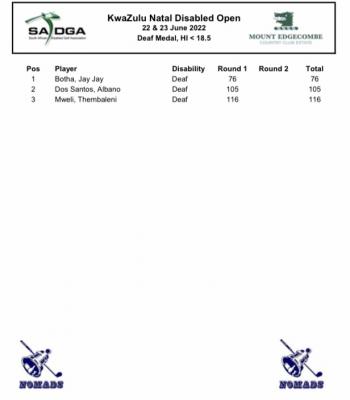 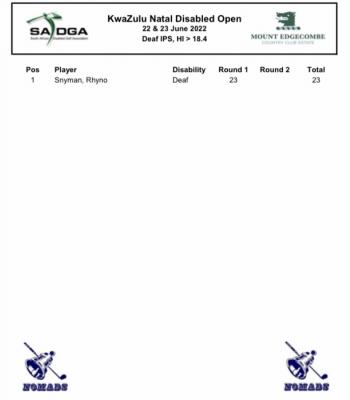