TSHWANE, 3 May 2015 – On Sunday afternoon at Zwartkop Country Club, the veranda was buzzing with excitement ahead of the Nedbank SA Disabled Golf Open, which tees off on Monday.
The topics of conversation switched from the unexpected heat to the unforgiving hazards, the tight fairways and serious water trouble.
And, of course, the main point of speculation: who will be crowned the 2015 champion?
One man is certainly ready to battle his way back to the top.
Iglin Grobbelaar was just 22 when he struck gold for first time at Randpark Golf Club in 2009. He defended at Langebaan Country Club a year later, but his bid for a hat-trick of titles was foiled by Daniel Slabbert, who enjoyed an unbroken run of three victories from 2011.
After a fistful of second and third place finishes, Grobbelaar is keen to rebuild some momentum and own that elusive third podium finish in the South African Disabled Golf Association’s flagship event.
“I am in a much better head-space that I’ve been for years,” the 28-year-old said.
“We are playing a course I know really well and I plan to take advantage this week. I am as hungry as ever been to win the big one.”
The Blair Atholl club professional believes that he has gained patience over the years and, having completed a course in psychology to better guide his students, has developed a better understanding of himself.
“There is a benefit of playing this championship again and again,” he said.
“You know exactly what you need to do, however, knowing it and doing it remains two very separate things. It’s not like the Sunshine Tour where you have a couple of weeks to work up to form. You only have this week to stand up and deliver. But I am quietly confident that I have what it takes.”
Grobbelaar had his first look at the layout in the practice round on Sunday and predicts a winning score of five or six over par.
“There is a lot of trouble out there, including some really mean water hazards and the course will punish any wayward shots or loose shots,” he said.
“There is a lot of water trouble, too, so you have to be on your game. I think the key would be to go for the centres of the greens to steer clear of trouble. If you stay patient, the birdies will take care of themselves.”
There are various divisions in the championship, including Leg Amputee, Arm Amputee, Les Autres, Visually Impaired, Wheelchair and Hearing Impaired, but the champion will emerge from the Division 1 Gross Stroke Play for handicaps of 0-18.
Grobbelaar will face some stiff competition, including defending champion Josh Williams from Canada, three-time champion Nedbank SA Disabled Golf Open Daniel Slabbert, reigning World One-Arm Match Play champion Reinard Schuhknecht, former champions Ben van Zyl and Nico Wentzel and young upstart Charl Theron. 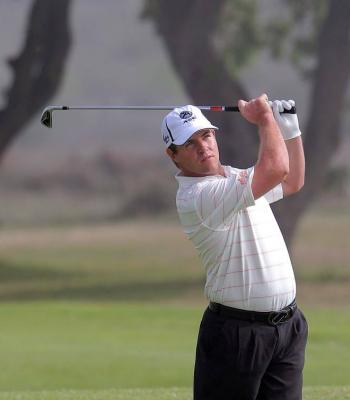