The FSP Elite Squad drew first blood against the Executive Director And Friends as they notched 121 to 105 stableford points at King David Mowbray Golf Club on Friday.

The event was the first in a four-match series to be played throughout National Disability Month. It sees the SADGA FSP Elite squad take on Executive Director Craig Moorgas and three other golfers of his choosing.

In the top match, Moorgas led from the front. Beginning on the par-5 10th, the leg-amputee made a flying start as he carded three three-pointers in his first four holes. His purple patch was highlighted by back-to-back pars on the 12th and 13th holes.

Craig did a fantastic job of keeping his tally ticking throughout the nine, notching 19 points despite a ring at his final hole. Moorgas’ great start was in stark contrast to his teammate Marchello Koopman who struggled on the opening nine, carding just seven points.

The FSP Elite squad duo of Simo Mdudu and Daren Hanekom meanwhile combined incredibly well. Mdudu recorded three-pointers at the 12th and 16th respectively to stay in touch with Moorgas as he recorded 17 points over the first-nine. A nett-birdie at the par-4 18th from Hanekom earned him a front-nine tally of 15 points.

Koopman offered Mogas considerably more support after making the turn. Three-pointers at the par-4 third and par-3 eighth lifted the Deaf golfer to a second-nine score of 14 points. Moorgas maintained his consistency as three three-pointers were the highlights of a back-nine which yielded 15 points.

The closing nine belonged to Hanekom, however. A birdie three at the fifth was complemented by a nett-par at the par-4 7th as Hanekom carded 19 second-nine points.  His efforts offset a tough second-nine for Mdudu (11 points) as the Elite squad golfers won the match 60-56.

In the second-match, it was all the Elite squad over the first-nine. Charles Williams and Ignation Douries dove-tailed incredibly well, sprinkling three-pointers among a number of two-pointers as both played to their handicaps and combined for 36 points.  Pollard made a relatively bright start - pars at the two par-3s saw him post 13 pints over the opening nine holes. Unfortunately Stirton gave his partner little support and resembled someone who had picked up a club for the first time ever that very day!

Needing to overturn a 12-point deficit over the homeward nine, Pollard and Stirton combined for five points on the par-4 third to pull to within eight points and keep their hopes alive. Though Stirton added respectability to his tally over the second nine with three three-pointers, Williams and Douries remained too solid for the opposition to truly challenge them down the stretch.

In the end, Pollard and Stirton were made to pay for their slow opening nine as they fell to a 61-49 defeat.

Well done to the FSP Elite squad but there’s certainly all to play for over the coming three weeks.

Next week will see the two sides play foursomes - one of golf’s true lotteries.

Many thanks to SADGA Executive Director Craig Moorgas for organising such a fun day on the course! 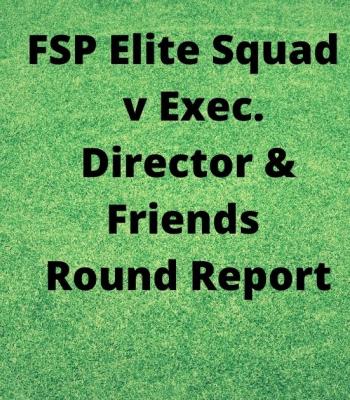