Frost ready to fire at Zwartkop

TSHWANE, 1 May 2015 – Business women, homemaker, golfer. There are thousands of women around the globe that juggle work, home and pleasure on a daily basis, but there are not that many that can say they excel at it with just one leg.
Jenny Frost is this exception to the rule, but don’t let the feisty 50-something golfer from Southern Cape hear you say it.
“I barely think of myself in terms of my handicap,” says the 2014 Knysna Ladies Club champion.
“My husband and I deal in the import, export and sales of classic cars and it keeps us frightfully busy, but there is always time to play golf and I play at least once a week, even twice when given half a chance.
“I compete in the Southern Cape league and the Seniors League and any other competition going, because nothing gets me fired up more than great competition.”
Frost will be lining up in her eighth Nedbank SA Disabled Golf Open at Zwartkop Country Club from 4-6 May and is already relishing the prospect of victory.
"We come to the Nedbank SA Disabled Golf Open to compete, to show that we can still do the things we like and to demonstrate to the younger amputee that it's possible to have a great life with prosthetics,” Frost said.
“When you get down to it, the most important things in life are to have fun and to lower your handicap, of course. Our flagship event lets me do both, and I wouldn’t miss it for the world.”
Frost was diagnosed with Osteomyelitis, an infection of the bone, at a young age.
She underwent surgery on her left leg at the age of 25, but the disease would eventually lead to the amputation of her leg below the knee.
“The doctors botched my surgery and I lived with severe pain for years,” Frost explained.
“I was always a pretty proficient golfer, but eventually I was forced to play with a cart and couldn’t get through 18 holes without a large dose of anti-inflammatories and painkillers.
“Life was a hell-hole and I elected to have the amputation done 10 years ago. I have never regretted my decision. It was a tough choice to make and a lot of baby steps after, but to live pain-free was absolutely worth it.
“As soon as I was fitted with my first prosthetic leg, I was out on the golf course and I have never looked back.”
Frost has a mantle of trophies to prove her love for and skills in the game.
“I inherited a little cash and used it to compete internationally and I have been very privileged to play all over Europe and in the United States,” she said. “It’s not just about winning and hauling the trophies home, but to be able to compete and to make friends around the world.
“Golf has given me many wonderful memories and experiences and a life beyond imagination. That is why I love being involved in the South African Disabled Golf (SADGA) First Swing Programme, because we show children that there is life beyond disability.
“Not everyone in the programme will become a great golfer, but they will all learn the values of this great game and principals that will stand them in good stead in their lives.
“Thanks to the support of the Southern Cape Golf Union, I get to attend the Nedbank SA Disabled Golf Open and share experiences with these kids. Everyone has a story and it is important for them to mix and learn and compete.
“Bob Wilson summed it up best for me when he said: ‘We're just a large amputee support group and we just happen to meet at the golf course.”
The tournament will be played over 54 holes in various disability divisions including Leg Amputee, Arm Amputee, Les Autres, Visually Impaired, Wheelchair and Hearing Impaired.
The player with the lowest aggregate gross score is crowned the overall championship.

Written and released by Lali Stander on behalf of the Sadga - South African Disabled Golf Association. 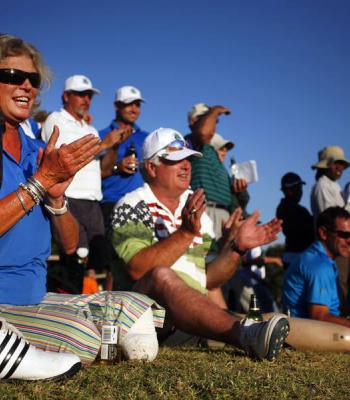