Exec. Director Holds His Own Against FSP Elite Squad

Executive Director Craig Moorgas and the FSP Elite Squad golfers began their 2021 golf year with a round at King David Mowbray Golf Club on Tuesday.

The format for the day was individual stableford with blustery conditions making for tough scoring. Beginning on the 10th hole, Deaf golfer Charles Williams made the perfect start with a birdie for four points. The remainder of his opening nine was a bit topsy turvy as he carded a quartet of two-pointers and as many one-pointers to turn with a tally of 16 points.

Williams overcame a double-bogey at his tenth hole of the day as he strung together five consecutive two-pointers before a handy three-pointer at the Par-4 7th, the second-toughest hole on the course. Two nett pars to finish capped a solid if not spectacular round of 33 points for the aspiring PGA professional.

Moorgas meanwhile was his usual steady-self. His swing (which is potentially shorter and faster than Tony Finau’s!) held up pretty well over the opening nine holes. The leg-amputee made the ideal start with four consecutive nett-pars. A disappointing double-bogey at the par-5 14th was offset by a nett-birdie two holes later as he made the turn on 18 points.

After nine holes, Moorgas must have surely been thinking about the possibility of beating Williams on points for the day. Two one-pointers over his final three holes, however, consigned him to 15 points on the second-nine as he finished the day level with Williams.

Simo Mdudu endured a torrid day out on the course. Despite carding two nett-birdies on his opening three holes, five one-pointers scuppered his hopes of making the turn in good shape. Unfortunately it was more of the same on his inward nine as four one-pointers and two zero-pointers suggested it was just one of those days for the leg-amputee. Nevertheless, Mdudu showed commendable fighting spirit as he carded two nett-birdies over his final three holes en route to a tally of 24 stableford points.

Much like Mdudu, Deaf golfer Daren Hanekom’s round was characterised by inconsistency. Hanekom carded three one-pointers and came up empty-handed on three occasions as he turned with a disappointing tally of 12 points. Six one-pointers over the closing-nine put paid to any hopes of a second-nine fightback as he signed for 21 stableford points.

Despite the tough conditions and some up and down golf, a fun day was had by all.

Keep your eyes peeled for further instalments of the Executive Director versus the FSP Elite Squad in the coming weeks. 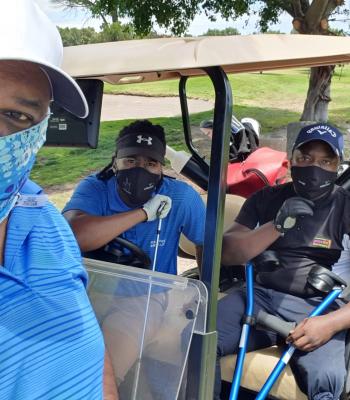