CAPE TOWN, 30 April 2015 - Walking is something most of us take for granted. It is as simple as breathing; we don’t think about it, we just do it.

But not a day passes that 16-year-old Citrusdal golfer Ignation Douries doesn’t pause to marvel at the biological wonder his legs perform every day.

“Six years ago, this life that I am leading right now was just dream,” Douries said. “I was born with a disability that left my leg muscles stiff as cardboard.

“Walking was something other people did. I watched my friends running around and envied them, but after surgery to my ankles and feet failed, I thought it was the end of the road.”

Doeries struggled to accept his destiny, but didn’t raise his hopes up when doctors suggested back surgery in 2009.

“I didn’t want to be disappointed again, but then the procedure worked,” he said.

“The muscles in my legs began to relax and with a lot of physiotherapy, I started walking. My own walk to freedom led me to the South African Disabled Golf Association (SADGA) First Swing Programme. That was six years ago, and every day I pause to gives a few moments of thanks to the surgeon who changed my destiny.”

Douries competes under the Les Autres Category since he still walks with some difficulty, but plays off a 13-handicap these days and confidently competes against able-bodied golfers.

After a full season of competing in Boland Junior Foundation events and snagging a fistful of top three finishes, he is armed with experience and champing at the bit ahead of his third appearance in the Nedbank SA Disabled Golf Open from 4-6 May.

“Some days I still can’t believe that I am living my dream,” he said.

“I played my first Nedbank SA Disabled Golf Open at Legends in 2013, but the moment was just too big. I was so excited, but I didn’t have a lot of experience. It was the first really tough course I played and competing against adults was difficult. I made plenty mistakes and couldn’t shake the nerves.

“It went much better last year at Zebula, because I knew what to expect.”

A visit earlier this year to Zwartkop left Doeries brimming with confidence ahead of SADGA’s flagship event next week.

As the reserve for the Western Province team, the youngster was included with the team that competed in the SA Inter-Provincial in February. Although he didn’t compete in the tournament, he played the course with SADGA CEO Eugene Vorster and believes his chances are greatly improved.

“Eugene and I played the course with some other guys and it’s definitely the kind of course where I can score,” he said.

“There isn’t that much trouble, except for water on some holes, and you have to try and stay clear of the trees. It’s also pretty flat, which helps and the holes run next to each other, so it won’t be as tiring.

“I’m very excited to see how I do this year. It’s always great to test yourself against the best in my category and I think I have the game to really compete and maybe even win.

“Mostly, I just want to make the most of every opportunity on the golf course.” 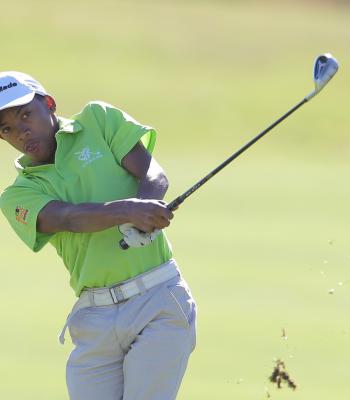