MAGALIESPARK, 14 May 2018 – Citrusdal golfer Ignation Douries gets pretty mad when he has a three-putt during a competitive round. However, nothing could wipe the smile off his face after an opening 13-over-par 85 landed Douries among the leaders in the 20th Canon South African Disabled Open on Monday.

Not even two three-putts at Magalies Park Golf Club.

The reason for his good disposition is tournament leader Mike Browne from England, and the chance to play with the scratch golfer in the second round.

Douries tied for third with four-time champion Daniel Slabbert and Trevor Reich. He, Reich and Dean Ferreira from Pretoria, who placed second on 84, will be lining up alongside Browne, who set an unchallenged clubhouse target at six-over 78, in the final group.

“I’ve never played in the final group before; I can’t wait,” said the excited Douries.

Unlike leg-amputees Browne, Ferreira, Slabbert and Reich, Douries competes in the Les Autres Division. He was born with Arthrogryposis – a rare muscular disease that ‘freezes’ the muscles – in his legs. Life in a wheelchair was his destiny until a life-changing operation to his spine in 2008 gave him some mobility.

The 19-year-old First Swing Programmer learner turned coach, was in seventh heaven at the prospect of learning from Browne.

“All the First Swing Programme kids met Mike over the weekend and we played nine holes in the practice round with him,” said Douries. “He is an awesome golfer and you can see why he competes on the pro tours. He shot 66 in the practice round, so it’s going to be amazing to learn from him, especially course management.”

Modest Browne was pleased to lead, especially given the testing conditions on day one.

“Coming from England, I’m pretty used to playing in the wind and rain, but these conditions were brutal,” said the 38-year-old former British soldier. “The first nine holes were not too bad.

“I was pretty happy after I holed a 60-footer for birdie at the ninth to turn two-under, but the back nine was a different story altogether. It was icy and the wind picked up. On some holes it was straight into us and on others, it hit us sideways. The strength of the wind made club selection really tough.”

Browne had bogeys at 10, 13 and the par-five 15th, where he was shocked when his approach to the green finished in the drink.

“I had the distance, the right club and I hit the shot well, but I watched as the wind pushed the ball back,” he said. “I also had to adjust to the slower pace; this is the first time I’m playing in a disabled tournament. I had a lot of fun with the guys and I just hope the weather turns sunny on Tuesday so we can attack the course again.”

Ferreira started with a double and Reich from Cape Town had a triple at the first. Both bogeyed the second, but battled on bravely to finish in the top three.

“I was supposed to be at work today, but now I’m really happy I decided to play this year,” said 54-year-old Ferreira, a horizontal boring mill engineer from Everton Engineering.

“I hit a lot of fairways and greens, and that always helps, because if you hit it in the wrong spot on this course, you’re in trouble. It’s really tight and the greens are lightning fast. It was a tough day at the office and I’m over the moon to be among the leading players.”

Reich, CEO of catering supply company Banks R&L Hiring, was delighted to feature in the top three in his 19th appearance in the national Open. “This course is all about the flat stick,” he said. “I hit a lot of wayward shots but I putted decently, despite a couple of two-putts or three-putts. The rain slowed the greens down slightly, but not much. If you put it in the right spot, you can definitely score.”

Charles Williams took a one shot lead on 90 in the Medal Competition, Albano das Santos leads the Stableford by six points on 30 points, while Shane le Roux opened with 24 points to lead the U-23 division and Usher Manel edged nine points clear of 14 in the Rookie Stableford.

Ferreira’s 84 earned him the top spot in the Senior Medal Competition. He leads by one from Reich with Danie Jordaan third on 88.

Garrett Slattery opened up a three shot lead with a first round 94 over Johan Kotze in the Visually Impaired Medal Competition and Kotze took the number one spot in the Stableford with 37 points.

PHOTO 1 – Tournament leader Mike Browne from England having a laugh with playing partner, double-amputee James Hourigan from Ireland during the wet conditions in round one of the Canon South African Disabled Golf Open at Magalies Park Golf Club; credit Dana Eitzen / Canon. 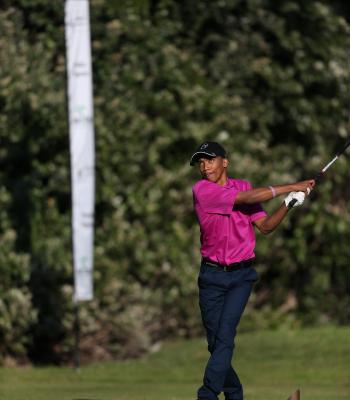 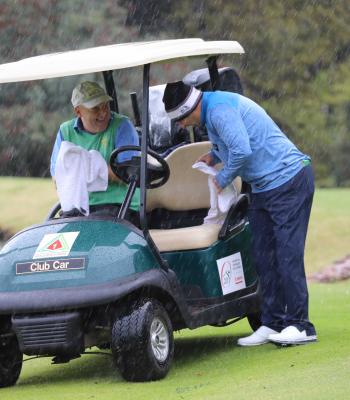