Get caught up on all the action from the final round of the Canon Gauteng Disabled Open at Zwartkop Country Club on Sunday.

Singh was in superb form throughout the series. Victory in the series-opener, the Canon Kwazulu-Natal Disabled Open was followed by a runner-up finish at the Cape Town Disabled Open. A dominant six-shot triumph followed at the Canon Port Elizabeth Open before he put the finishing touches to an outstanding stretch of golf with another impressive win.

He did not have it all his own way in Gauteng, though. Trailing Curtley Roberts after the opening round, Singh remained a shot adrift with nine holes to play in the 36-hole event. Momentum swung in his favour coming home, however.

After 27 holes of great golf, Roberts faltered on the final nine holes. Five dropped shots over the first six holes on the second-nine put paid to his title hopes but Curtley is to be commended for some terrific golf for much of the event at his home track.

Singh meanwhile played solid enough golf to get the job done. Birdies at the par-5 10th and 13th were the highlights of an inward-nine of 39 which also featured a bogey and two double-bogeys.

Despite closing with a double-bogey, Singh’s final round 79 ensured that the day, the event and ultimately the title of Physically-Disabled Strokeplay Canon Open Series champion belonged to him.

Leon Strydom overcame a back-nine wobble in the final round of the Gauteng Disabled Open to secure a two-point victory over Charlene Pienaar and book his spot in the Champion of Champions field.

Strydom played superbly on the opening day - notching an impressive 40 points as he opened up a six-point advantage over Pienaar. His form continued on day two as he notched two four-pointers, a three-pointer and a two-pointer over his first four holes.

Pienaar for her part kept pace with her playing partner courtesy of four-pointers at her second and fourth holes of the day to go along with a three-pointer at the pair’s first hole - the par-5 10th. The nip and tuck nature of the round continued and after nine holes Pienaar had 21 points to her name while Strydom had 20.

Strydom had his resolve tested on the second-nine. Having begun with a three-pointer and a two-pointer, the six holes which followed yielded just additional six points. Pienaar meanwhile kept her tally ticking over with 11 points over the first six holes of the second-nine to apply some pressure to Strydom’s lead. A further six points on the remaining holes saw Pienaar sign for 17 second-nine points.

Strydom dug deep when it mattered most though. A three-pointer on the final hole by Strydom proved decisive as he ultimately claimed the win.

Charles Williams overturned a three-shot deficit in round two of the Canon Gauteng Disabled Open en route to a six-shot triumph over Jay-Jay Botha.

There were two particularly pivotal moments during what was effectively a head-to-head final round battle between the pair. Having begun on the 10th hole, the par-3 16th was the site of a crucial three-shot swing in Williams’ favour after he made bogey while Botha made an unfortunate quadruple-bogey 7.

Williams’’ opening-nine of 40 eclipsed Botha’s tally by four and set the stage for a thrilling conclusion. A double-bogey from Williams at his tenth hole of the day allowed Botha to edge ahead once more. With just five holes remaining, Williams produced a moment of brilliance which turned the tournament on its head.

The First Swing Program coach thought he’d taken too much club after striking a six-iron from 172 on the par-4 5th. As it turned out, it was right on the money and resulted in an eagle-2. After Botha made a bogey, Williams found himself in the driver’s seat once more.

Williams built on his lead down the stretch. Pars at the 6th and 7th to Botha’s bogey and double-bogey allowed Williams to put the result beyond and he eventually signed for a 75 while Botha carded 84.

The pair - along with Cedric Touzard- will now compete for the title of Deaf Strokeplay Champion at the Canon Open Series Champion of Champions.

A triple-bogey on his opening hole for zero points was a less than ideal start for Van der Berg. This clearly galvanised the Deaf golfer as he carded four three-pointers to turn with 20 points to his credit.

The second-nine was just as good as the first as he reeled off five two-pointers and a three-pointer over the first six holes. Impressive though that stretch was, he finished in even more spectacular fashion as he closed with three consecutive three-pointers.

His final round tally of 42 points completed a dominant display and ensured that Van Der Berg completed his second victory of the series after winning the Canon Kwazulu-Natal Disabled Open.

The Canon Open Series Champion of Champions begins on Tuesday the 9th of November. 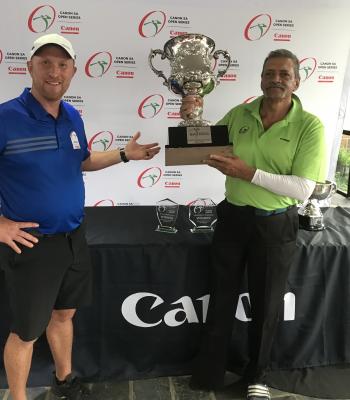 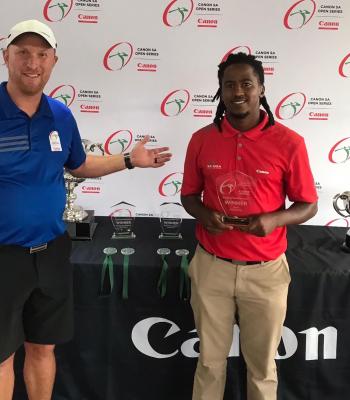 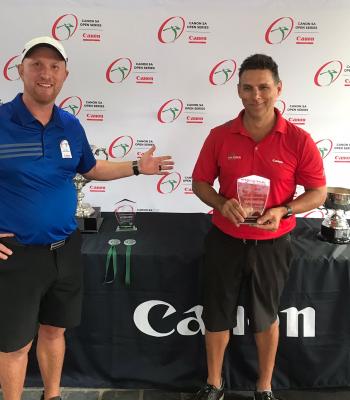 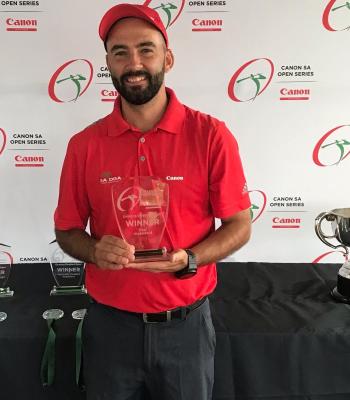