MAGALIES PARK, 14 May 2019 – Englishman Mike Browne stayed on track for a successful title defence in the Canon SA Disabled Golf Open after taking the sole lead at Magalies Park on Tuesday.
Browne, who went wire-to-wire at the popular resort course last year, shared the overnight lead with the Australian veteran Geoff Nicholas after an opening two-under-par 70.
With par taking a beating on day two, the 41-year-old leg-amputee posted a battling 76 to lead the field on two-over-par 146.
Sydney’s Nicholas, also a leg-amputee, returned a 78 to finish two shots back and South African Les Autres pair Iglin Grobbelaar and Charl Theron, carded matching rounds of 79 to tie for third on 156.
Browne overturned a bogey start with a birdie the fourth, but further drops at six and eight took him through the turn on two-over. After bogey number four at the 12th, the defending champion stemmed the bleeding with a birdie at the par five 13th.
“After I dropped at the next par five (15), I really wanted to finish with a birdie, but I put one in the water,” said the former Royal Artillery gunner.
“My drop finished in a hole and I had to thin it out, and flew it over the back of the green. A double bogey-finish was definitely not on my mind this morning, but it was a tough day at the office. A lot of tucked pins, very fast greens and a swirling wind.
“I felt I played a lot better than my score suggests, but I’m still on track to defend, so I’ll just have to dig deep in the final round and see it through.”
Four-time One-Arm World champion Reinard Schuhknecht was the only player in the top 10 to improve on his first round score.
“I had a great ball-striking day, but I let two eagle putts slip and missed a couple of birdie chances,” said the 27-year-old Heron Banks golfer, who finished fifth on his own on 157 after a round of 77 that featured at least one eagle.
“I hit a really good drive down the fourth fairway and 9-iron still from 142 metres on four. Made the eagle putt, but then missed a three-footer at the eighth for birdie. I boxed a 10-footer for birdie at nine, but missed the eagle putts at the two par fives coming home.
“I hit a huge drive on 13 and pitched my approach just left of the flag and after missing another short one for birdie at 14, I went for the green in two at 15. I hit wedge from 125 metres in, but missed that eagle chance too.
“I holed a huge putt from off the green at 17 for birdie, but missed the birdie chance at 18. The greens were really fast and the pin positions were tricky. It was a real test of patience today. It will take an exceptional round to catch Mike, but you don’t stop fighting until the last putt drops. Anything can happen, so I’m going to stick to my game plan and hopefully a few more putts drop on Wednesday.”
Twenty-year-old Ignation Douries from Citrusdal grabbed a share of sixth with an 82.
“Last year I started with two rounds of 85, so it’s an improvement,” said the First Swing Program coach, who finished on 163 with Western Province team-mate Trevor Reich, who carded 83.
“I shot 87 in the final round to finish ninth last year, and my goal was to improve this year, so hopefully I can break 80 on Wednesday and finish in the top five.”
Meanwhile Les Autres golfer Graeme Mazur hopes to make it an English double after taking the lead in the IPS Stableford Division for handicaps 18.5 and higher.
Last year’s runner-up added a 34 to his opening round 31 to take the lead on 65 points. The Hove golfer leads by four points from first round leader Shelvin Kraemer and is eight points ahead of visually impaired Leon Strydom.
Former champion Charles Williams from Cape Town opened up a 10 shot lead on 168 in the Deaf Medal division with rounds of 86 and 82 over last year’s winner, Darren Hanekom.
Williams and Hanekom are both First Swing Program graduates turned coaches, who play out of King David Mowbray Golf Club.

PHOTO 1 – Mike Brown from England stayed on course for back-to-back victories in the Canon SA Disabled Golf Open after taking a two shot lead in the second round at Magalies Park Country Club; credit Tyrone Winfield. 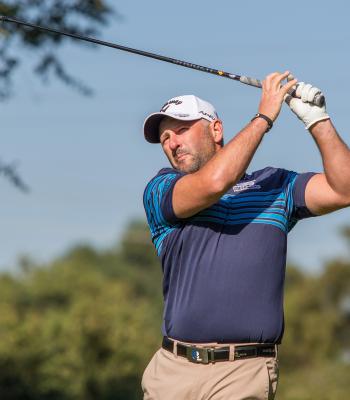 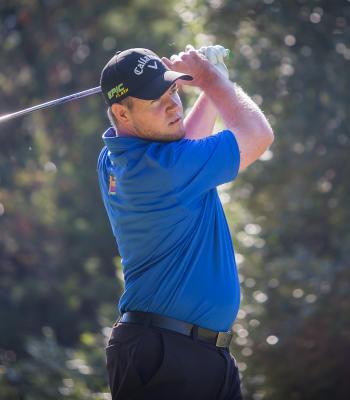 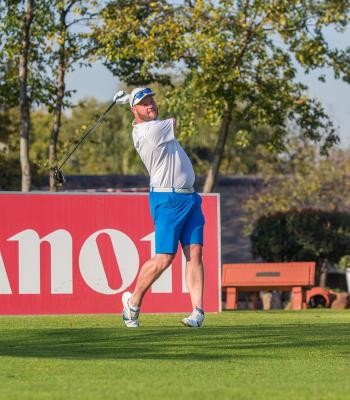